Patent Litigation is Big Business in the Eastern District of Texas 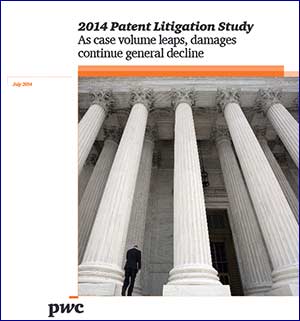 Despite U.S. Federal legislation, court cases and political action groups aimed at limiting mega verdicts in patent litigation, the lucrative business of filing patent infringement cases continues to grow.  The latest studies, published in 2014 show that in 2013, almost 6,500 cases were filed, an increase in 25% from the prior year.   Nonpracticing Entities (NPEs) or what are commonly known as “trolls” continue to play a growing role in patent litigation.

In the most recently published Patent Litigation Study, published by PricewaterhouseCoopers in 2014, several key observations were made from their detailed study.  One of them is that damages awarded to NPEs averaged more than triple those for practicing entities over the last four years.  And, as we all know here in Dallas, the U.S. District Court for the Eastern District of Texas continues its long held position as one of the top five district courts for patent holders to bring suit and win.  And a win in district court doesn’t mean a thing because 71 percent of all cases are appealed.  Wow!  So a patent case is, more often than not, tried twice.

So far, the parties in a patent suit each carry their own costs. A troll is most likely to get a business to settle than fight due to the very high costs of patent litigation.